We have now passed the 2-day mark of no electricity.  Now what does that have to do with complexion cream?  Our electricity is turned off frequently.  During the outages, thieves take advantage of these times to steal from the the electric company - whether it be poles, wiring, or oil.  Tuesday, when our electricity was turned off, someone drained the oil from the transformer that services our neighborhood.  Hence, when electricity was restored, the transformer burned up.  This oil is sold in the market to use in their homemade welding machines or as skin-lightening cream.  Now doesn't that sound like a commercial in the making!  No one has been able to tell us if this oil truly does work to lighten the skin color, but people seem to buy it as this is the third time we have had this happen.  So...for those of you who want to be whiter, stop by your local market today for your freshly drained oil!

Must hurry and finish using appliances before we turn off the generator.  Thank you, God, for our generator!
Posted by Sally Stensaas at 12:08 AM No comments:


One of the many blessings in my life has been the gift of such wonderful in-laws.  This blessing has been doubled by being able to serve in the same country as them.  Sunday we drove to Mbarara after church and joined Alisha (Keith's sister ) and Matt's family (Keith's brother) for a surprise anniversary party honoring their parent's 40 years of marriage.


We had a great time together watching old family videos, playing with fat chameleons, and eating homemade ice cream.

Families are so much fun!
Posted by Sally Stensaas at 2:27 AM 1 comment:


About twice a year our church gathers together for an evening of fun.  This past Friday we had our own miniature World Cup.  All of the benches were pushed against the walls for the spectators, and the goals were set up in the middle of the auditorium.  It was a little more difficult for the players to maneuver the balls as we alternated between a balloon ball and a blow-up beach ball, but the fans were able to participate, also, in getting to kick or throw the ball anytime it came close to them.


The medals were made by gluing two lid tops together with ribbon in between, and the trophy was two bottles of soda.  Each player was also given a large sucker.


Everyone had a great time, and a great meal.  We love our church family!
Posted by Sally Stensaas at 12:32 AM 1 comment: 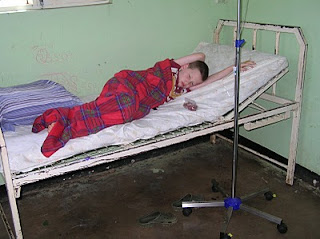 "Mom, Shiloh's sick."  Upon hearing these words in the wee hours of the morning, Keith and I made a world's record for getting out of bed.  We rushed to Shiloh's and Skyler's room to find Shiloh making strange noises, saliva flowing out of his mouth, and his jaw locked tight.  With Shiloh's diabetes, we have been told not to take the time to test his blood glucose if he is showing unusual symptoms, but to immediately give him raw sugar.  Trying to pry his teeth apart got my fingers bit, but I finally managed to get about 1/2 teaspoon into his mouth and then grabbed the glucometer.  We were in disbelief to see that his glucose was only at 70, which is fine as we were told to keep it between 80 - 120.  He has never shown unusual symptoms at a 70 reading, and here he was confused, unable to pronounce his words, and unaware of what was going on.  We moved him to the couch (the top bunk isn't the easiest place to treat someone) and tried to give him sips of water while going through possible diagnoses.  He had no fever or chills and complained only of his head and stomach hurting.  I tried giving him some ibuprofen for his headache, but he could swallow only half a dose. Keith then suggested we test his ketones which were so high that they didn't even register on the deciphering code.  We began giving him sips of rehydration drink, and although he vomitted after every other drink, he started to show signs of improvement.  After an hour, he hadn't improved as much as I thought he should, so we decided to take him to the hospital and ask for him to be put on a drip.  Upon arrival, I spoke with the pediatrician who had treated him in January and expressed my concern for his potassium level.  He agreed with me and sent us to town for the potassium test.  However, the clinic was out of the reactor used in testing and wouldn't be getting any for about 2 days.  (This is the only place in Masaka that tests potassium.)  So...back at the hospital I requested the doctor to put him on the drip, and if Shiloh didn't show any signs of improvement then we would take him to Kampala (2-1/2 hour drive).  The children's ward doesn't have private rooms, but there was one little room through three doors that looked like it was used for storage or maybe a place for the nurses to sneak off to and rest.  We covered the one-inch mattress with the sheets I had brought, and Shiloh bravely faced the I.V. again.  His blood count was normal, and he tested negative for malaria. Before 500 ml of ringer's lactate had entered his system, he was asking to eat and was pestering Keith.  After one litre, Shiloh was released leaving a baffled doctor as to why the ketones could be high and not the blood sugar and a puzzlement of what could bring this on so suddenly with seemingly no cause.  We are rejoicing over the rapid improvement, but ask your prayers in helping us determine what brought these symptoms on.  The rest of the children did very well in our all-day-absence and had plenty of notes and colored pictures awaiting Shiloh's arrival.  We lavished much praise upon Skyler for alerting us to his brother's condition.  "When I got up to go the bathroom, I heard him make crying noises, so I got you."

Thank you for your prayers for us today!
Posted by Sally Stensaas at 1:19 PM 3 comments:

Email ThisBlogThis!Share to TwitterShare to FacebookShare to Pinterest
Labels: Children

World Cup Plus One Week

This was the scene at our house a week ago: 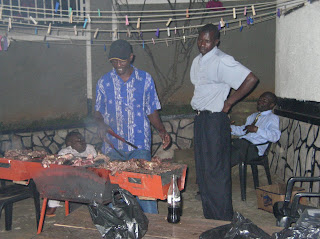 The men were in the back yard grilling the goat meat. 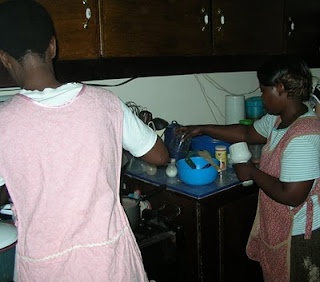 The women were in the kitchen fixing rice and g-nut sauce. 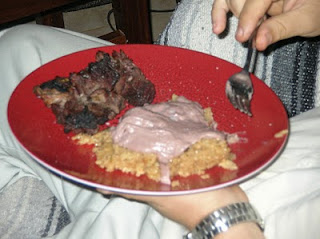 And this was the final meal...with soda, too.
G-nut sauce is good on rice, posho (corn meal mush, extra thick), matoke (cooking bananas fixed like dry mashed potatoes) and Irish potatoes.  This rice that you see is very good by itself cooked with burnt onions and mixed spices, but so many of us love g-nut sauce that we voted to fix it!  By the way, g-nut stands for ground nut which is a type of peanut.

Many people have asked how the 7/11 bombings have affected us.  We are about 2 1/2 hours away from Kampala, so we are still able to conduct our ministries and business as usual where we are.  However, the bombings did damage the internet hub in Kampala, so our internet is very unstable.  Please remember to pray for those who lost loved ones in the bombings that they will seriously think about their own short life on this earth and their eternity after death.
Posted by Sally Stensaas at 7:03 AM 2 comments:

Today was our ladies soul winning time, so I drove the ten of us to the village of Kijjabwemi.  The kids seemed to be enamored with me today.  One group of children that was following me around was fascinated with the skin on my feet.  They would bend down to touch it, pinch it, and then push at the veins.  I would quickly pull my foot back which would start them giggling, and the process would begin again.  After this group left us, a group of three took their place.  One little boy wanted to hold my hand, which is highly unusual, as many times, small children run off screaming when they see a white person up close.  As we were walking around holding hands, he noticed the rubber band on my arm that I had taken off of the stack of tracts.  I took it off and showed him how to shoot it.  His head swung around trying to find where it had gone.  I went through the steps again with his sister giving her another rubber band I had.  They were elated to receive such a fascinating gift, and it was fun watching them try to shoot it.  Hopefully, they will enjoy just shooting it in the yard and not discover the fine art of rubber band fights!  We praise the Lord for the two people saved!
Posted by Sally Stensaas at 3:04 PM No comments:

You Are Most Welcome!

Living in Uganda, this is the saying we use when inviting people into our homes.  So, as I welcome you into our home and life through this blog, I say, "You are most welcome!"   I am a newbie at blogging, so I have a lot to learn. I ask your patience with me as I tweak this as to what I have worked out in my head.  My goal is to make a little part of my life easier by being able to post updates quickly and as things happen.  I hope you enjoy it!
Posted by Sally Stensaas at 2:47 PM No comments: