February began with Shae-Lynn turning 16.  We celebrated with other missionary girls at the coffee shop.  What a blessing it is for our children to have two other like-minded missionary families in our town with which to fellowship with.

A couple of times a year when we have visitors, they overlap in their visits.  Such was the case when Jerrold and Karen Myers (missionaries from South Africa) and Cody Crevar (college graduate from Canada) arrived one day apart.

Having several married couples in our church this year, we were able to host a Valentine Supper for them (actually one couple is engaged).  We enjoyed several games in which we discovered how well they knew each other and how well they worked together.

One Sunday when we arrived home from church, we found that one of our dogs have been attacked by a wild animal.  She had several small slices on her underside and a large one on her back hip.  The vet suggested it could have been a monkey, but we think it was probably a mongoose.  We tried taping it closed.  That didn't work.  We had the vet stitch it.  The stitches came out in less than a day.  We even tried super glue, which lasted just a couple of hours.  We gave up, and just let it heal on its own.  Compared to the previous 3 months, February was slow and quiet.

March began with Keith taking Stanley, Cody, another missionary, and a national into Rwanda.  Our van broke down before they reached the border, so they ended up spending the night and hiring a taxi van to take them.  There is a stark difference between these two neighboring countries (Uganda and Rwanda).  Rwanda is very clean and modernized, with the people taking pride in their country.  Uganda has trash everywhere, still makes bricks as in the Bible-times, and is tribalistic.  However, Uganda has more religious freedom.

Then our kids participated in an online spirit week with other MKs around the world.  Here are a couple of our submissions.  You can go to the Baptist Missionary Women website to see even more.


Activity picks up again in April with visitors coming and going until we leave on furlough in addition to conferences, ordinations, Anniversary Sunday, and so much more.  Thank you for your faithful prayers for us.  How much they are needed in every situation we face.
Posted by Sally Stensaas at 1:07 AM No comments:

January 2016!  No sooner had Christmas been packed away then I pulled out the sewing shears, the glue gun, and the mixer.  Two weddings and one graduation kept me busy.

The first full week of January we had our Tri-Annual Bible Institute and had graduation for our Masaka Baptist College on the final night.  As the cake decorator, I was counting myself blessed that the name of both graduates was "Charles." 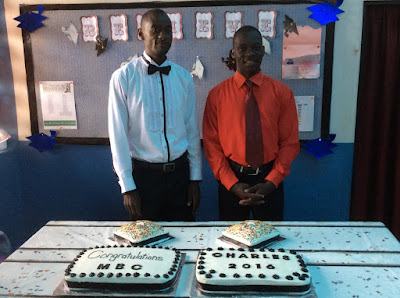 Two days later, Keith had to preach for a wedding in the village, of which they asked me to make the cakes.  Since I started splurging and buying ribbon and artificial flowers, the cake decorating task has been much less stressful.  (I still wish I could take a cake decorating class and actually get some professional training.)

During the midst of all of this, I was taking Shae-Lynn in for numerous testings for a medical problem that we still haven't been able to pinpoint.  We would appreciate prayers for her.

One week after the village wedding was a wedding at our town church - a couple that began attending at teenagers.  I told my daughter that she had better get busy saving for her wedding because I did not want to make all of the bridesmaid dresses, the bouquets, the flower girl baskets, the cakes, assist the bride, serve the wedding party, and be wedding planner all over again.  In 20 weddings Keith has performed, this is the first time we have pulled off a rehearsal!  Usually, no one has a clue as to what they are supposed to do, and Keith just directs everyone as he leads the ceremony.  It was amazing how smoothly everything went.

I didn't make all of the cakes.  The large main cake and two smaller ones were purchased.  When Charles and Beatrice tried to cut the cake, the knife broke.  The frosting on the cakes here is rock-hard (the night before at the introduction, the cake table fell over, and the plastic-covered, round cakes just rolled - no harm done.  Sometime I will share a video of us trying to cut one of these cakes.)

The very next Sunday the ORH medical team of 38 arrived.  This time things were totally different as the clinics were held 4-1/2 hours away in Kasese, where Keith's brother is pastoring.  I packed up our family and spent the week at Matt and Keila's house in order to help them host the team and do the cooking.

Our temperatures here in Masaka can reach the high 90s, but cooking in a kitchen that reached 103 degrees repeatedly was a dripping experience.  It is amazing how one small country can have so many different climates and is so diverse in scenery.  While traveling from Kasese to Kampala we saw forests of pine trees that we didn't know existed here.  Where we live, banana trees surround us.


(To Be Continued)
Posted by Sally Stensaas at 5:45 AM No comments:

December 2015 began with a wonderful Missions Conference.  However, I can't find a picture for it!  Sorry.

December and January are usually our hottest months of the year, so instead of advertising warm, seasonal drinks like restaurants do in the States, ours invites you to cool off. 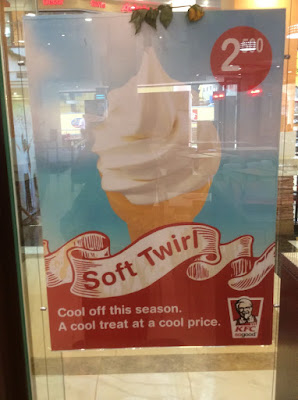 After the Missions Conference, I threw myself into our Annual Ladies' Conference preparation.  I had SO much fun!  For three days of classes, I had just 11 pages of notes (which even frightened me), but God expanded my thoughts, and we all had a great time studying Relationships. 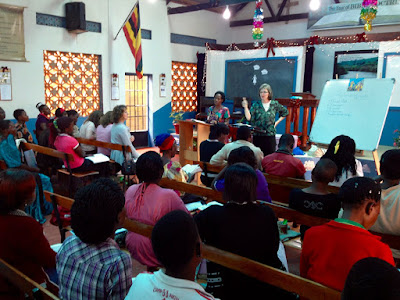 Then came Christmas.  We were blessed to have Keith's family spend several days with us to share old stories, go swimming, eat together, and make new memories. 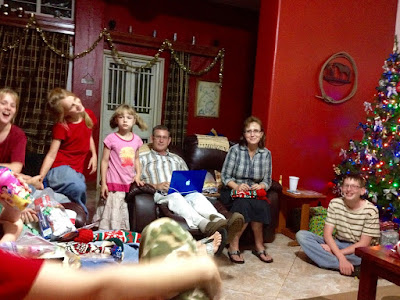 When we took Mom and Dad to the airport, it was difficult to think of them as moving.  This wasn't just a furlough they were going on.  Although we are saddened at their departure, we are excited to see how God is going to use them greatly in the new ministries He has for them. 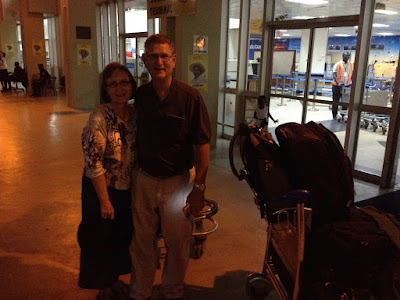 (To Be Continued in Part 3)
Posted by Sally Stensaas at 12:37 AM No comments:

Looking back...ok, way back to the end of last year, it doesn't seem possible that we can get busier each holiday season, but it happens.  There is always so much more planned from November - January than seems possible to accomplish.  Pictures are worth a thousand words...so here is my condensed thousand words in pictures...in several parts.

One of our dogs gave birth the day after Uganda's Independence Day.  They are so cute when they are puppies, but we have had our fill of them.  I have declared, "No more!" 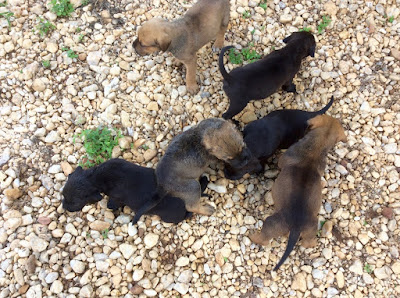 The end of October brought us some return visitors from Canada.  This church has been such a blessing to us in the last three years.  This year, they paid for new songbooks for our main church and our village churches, too.  However, there were a lot...a whole bunch...of late, late nights for me as I put the songbook together, as well as a music book.  And as much as I proofed it, yes, I still find mistakes in it.  However, it is a whole lot better than what we had before.

November found us in Mbarara to help Keith's parents pack up, have a yard sale, and attend their last service at their church there.  I mentioned to mom that as many countries as she has lived in, she has become a pro with all of the moving.  The Lord has spoiled me; we have lived here for 20 years. 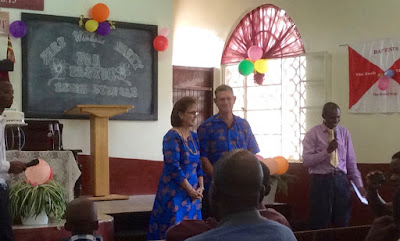 Thanksgiving was a wonderful, relaxing holiday.  How grateful I am for the family the Lord has blessed us with.  With all of the busyness, it was nice to take a whole day off and spend time with each other. 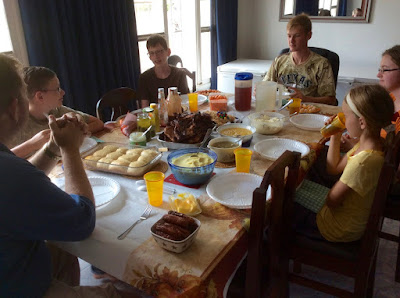 It happens every time.  The few months before our furlough, our appliances begin to break down.  Hot pots, fans, blender, and the washing machine have banded together against us.  It was 8 weeks before we got the washing machine fixed after this brake down, however, we were able to use another machine on our front porch for the last of those weeks.  The fix-up worked for a week, then broke down again.  We got it fixed, and just last week, it broke down again.  It really wants to die, but we keep resuscitating it.

(To Be Continued in Part 2)
Posted by Sally Stensaas at 2:05 PM No comments: