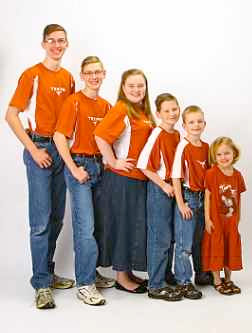 I pray that each one of you mothers had a very blessed day on Sunday in celebrating Mother's Day, but I, also, count it a privilege to celebrate being a mother every single day.  My six blessings have loved me unconditionally, forgiven me when I have failed them, and showered me with attention.  I have had the awesome privilege of leading five of them to the Lord, and my prayer is that they will keep their hearts in the hands of the Lord and be yielded to Him every day.

Keith took another missions trip on Friday to the most primitive village he has ever been to in Uganda.  Because he drove on a bicycle path, our van received numerous marks from the bush.  There were no vehicles or sounds of a town, so when the men stood on the van to preach, their voices carried for long distances.  They preached to this village full of fishermen who were mending their nets and to a group of hunters that were headed out with their spears and saw four people trust Christ.  The church that has been started there is meeting in a grass-roofed, mud hut.  Please pray for this village of Kalangala that more people will be reached for Christ.

In our Sunday service, two people were saved, and one was baptized.  More of those who have recently been saved plan to be baptized this week.  Last night during soul winning, we came across an old lady who had just received word that her grandson had died.  This woman was especially grieved as she had only one son and only one grandson, and both of them were now dead.  This family line had stopped.  What about us as Christians?  Has our spiritual family line stopped, or are we still winning souls and teaching those souls to win souls?


I ask that you pray for Keith this week.  He is working very hard to get all of the renovating completed at the radio station before the Sharps and Damrons arrive on Friday.  However, numerous problems keep popping up.  One of the solar panels got broken.  Power has been off during the day for four days in a row.  The new radio batteries delivered were not what we ordered (although I think they will work out).  In other words, the devil is fighting us getting the radio station back on the air, reaching the lost for Christ and encouraging Christians in their Christian walk.

Remember to pray for the safe arrival of the Sharps and Damrons and for all of the luggage to arrive safely, too.  Radio broadcasting is a powerful means of spreading the Gospel here in Uganda.  It is reaching into more homes than we can possibly visit in our lifetime.  It walks through doors that would be shut to our physical presence.  Pray for Word of Life Radio!

I promised I would post some pictures when I got this new program figured out.  Well, I'm not sure I have it figured out, but I am going to give it a try.  I just randomly chose some pictures to see if I am doing this right, so I will try to be more organized next time if this works.  I believe I have reached the point in my life that it is easier to tell my kids what I want to get accomplished and have them figure out how to do it.  I remember my mom doing the same thing.  Anyway,  I hope you enjoy the sporadic photos throughout my post.


School is back under way, and we are on schedule.  The children enjoy being able to spread out and share in each other's studies.  Keith is working hard at getting the radio station remodeled before the arrival of Bro. Sharp and Bro. Damron, who are bringing new equipment to install.  We have made 16 solar panels for the radio station to run off of, so hopefully we will be able to stay on the air more consistently.  This will also cut back on our electricity bill.


We are seeing an excitement among our church people as the changes we have made are resulting in souls being saved and more visitors coming.  Between last Sunday and yesterday, we had 10 people saved!  When one of these men was asked if he wanted to be saved, his reply was, "I've been waiting my whole life to do this." Yesterday we also had 3 people join the church and 8 visitors.  We have changed our soul winning outreach to Sunday nights, and last night we had 22 soul winners come.  There is a unity and joy that is exciting to see.  Twice a month Keith has also been taking mission trips to the village churches.  Last month he took a group to the Kalangala Islands, where they preached to two churches that Bro. Paul has been assisting.  (Many of you have met or seen Bro. Paul in pictures.  He was crippled by polio as a youth and must crawl to get around.)  One of the men there said, "We didn't know there were other people who believed like we do."  These islanders seldom come to the mainland and make their living off of fishing.


Between supplies and paperwork, Keith has had to take several trips to Kampala, the capitol.  During one of his last trips, he was riding between places on a public transport motorcycle.  The driver had discovered that Keith was from Masaka and began to ask him questions:
"So, do you have a wife?"
"Yes, I do"
"Is she white or black?"
"She's white."
"Why don't you get a black one?"
"I don't need another wife. When I have the best, there is no need to get more."
"But how do you know you won't like another if you don't try one?"
"Sir, I have one wife, and she has her problems.  What would I do with several wives and all of their problems?"
To this, the driver just started laughing.  By the way, Keith wasn't indicating that I am a problem wife, but he was just trying to help the man see the common sense of God's plan.  This isn't the first time that the Ugandans have tried to give him another wife.  Our neighbor near our church was having a reception for their newly-married daughter.  As is the custom, Keith and a couple of men from our church attended for a couple of minutes to congratulate them.  The father of the bride told Keith, "I have another daughter that you can have."
"No, that is ok.  I am already married."
"But that is no problem, here in Uganda you can have more than one wife."
"But I am happy with my wife, and I don't need another."


We are currently in the rainy season which is keeping the bugs and rats out of my house.  Usually by noon the rain has stopped, and I am able to hang the washed laundry out on the line, and the children can get some outside exercise.  Everything is a beautiful green with flowers blooming brilliant colors.

Well, I started this on Monday, but I hit a button and it all vanished.  However, today (Tuesday) I found it again, so I will get this sent before it gets lost.  Thank you for your prayers for us.  Have a great week!

Posted by Sally Stensaas at 12:28 PM No comments: