It may be old age.  Perhaps it is how busy we find ourselves being.  Whatever the cause, I am terribly late in posting the last two birthdays of the year.  I was even late making their cakes, but I have the sweetest, most forgiving of kiddos.

Stanley requested the planets.  How simple, right?  Just 9 balls (yes, he wanted Jupiter included, although its planet classification is debated by some).  However, I wanted to make them different colors.  I lined up 9 bowls and added food coloring to each one with a little bit of water.  I tried rolling each planet in its designated color, but that idea failed.  I certainly didn't want to completely cover them with frosting.  Then the idea to "paint" them popped into my head.  I washed up one of the kid's paintbrushes and used the food coloring mixture to paint each one.  Of course, my own fingers were quite colorful when the job was completed, but I got the job done.  Three other missionary boys came over for a sleepless-over, and I think I got as little sleep as they did.

We decided to do an afternoon tea for Savannah's party.  We had everything set up outside when the dark clouds rolled in and the wind began to blow.  My faithful helpers grabbed everything, and we set everything up again in the dining room.  Since we had cupcakes for her tea party, I decided on a large cupcake for her birthday cake.


You may ask, "Do you get to have ice cream for your birthdays?"  There are places to buy decent tasting ice cream, but it is quite pricey.  Then ice cream look-alikes are also sold.  They are made with some strange ingredients as it can set on the counter for hours and still not melt all of the way but become a spongy-glob.

But we are the Stensaas family, and so we must do it the Stensaas way - HOMEMADE!  The two most requested flavors for birthdays are mint chocolate chip and root beer.  Since it does take so much effort and makes so much mess, we always make a double batch.  You can see in the picture the ice cream maker to the left with a large bowl of freshly made ice cream setting next to it.  On the floor is a basin holding the crushed ice.  Then the counter is loaded with all of the containers we use to make 18 kilos of ice.


Is it worth all of the work?  DEFINITELY!

Posted by Sally Stensaas at 11:55 AM No comments:

Email ThisBlogThis!Share to TwitterShare to FacebookShare to Pinterest
Labels: Birthdays

Congratulations, Uganda, for 51 years of independence! 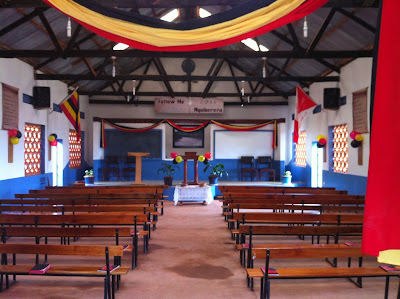 Out of the 196 countries in the world, we are very grateful that God chose Uganda for our place of service.  We love being here!  We get the privilege of seeing God change lives.  We enjoy the friendships of fellow Christians from different cultures.  We get to be used of God to reach people who have never heard the Good News of Salvation.

Being American citizens with a strong sense of patriotism engrained in us, it is sometimes baffling to us how carelessly some Ugandans regard their Independence Day.  While running errands in town today, Keith greeted many people with, "Happy Independence Day."  These are some of the responses he got:

"Is today Independence Day?"
"It's just a rich man's holiday."
"Why celebrate? With independence we lost our jobs, infrastructure, free education and proper health care."

Despite the attitudes we sometimes face, we do our best to inspire a spirit of patriotism and celebration in our church by holding a special service. 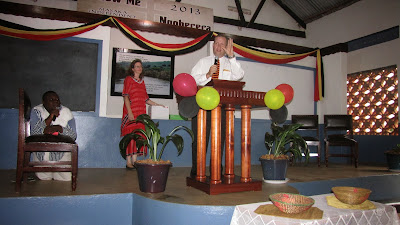 Tonight we played Uganda Trivia and gave out prizes for each of the 21 questions.  Keith preached a great sermon about three things that come with freedom (responsibility, accountability & sacrifice), and then we served refreshments.  The best part of all - two children found freedom in Christ by placing their lives in God's hands. 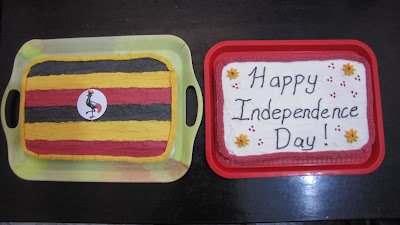