As I was reading in Colossians this morning, all of the verses about giving thanks and thanksgiving jumped out at me.  We truly have so much to be thankful for, but we should remember to make every day Thanksgiving Day. 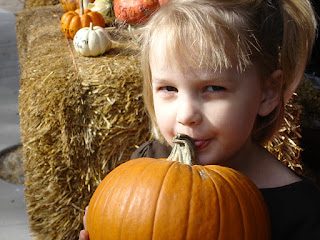 Thank you for being our friends.  Thank you for the part you have had in our lives.
May God richly bless you this year!
Posted by Sally Stensaas at 11:56 AM 1 comment:

Email ThisBlogThis!Share to TwitterShare to FacebookShare to Pinterest
Labels: Holiday

Having been to 28 states in 7 months time, our family is so ready to return home.  Despite the many miles, though, we have also been extremely blessed in our travels.  We were in 5 missions conferences right in a row, and, wow, how well we were treated!  Far better than we deserve.  One particular blessing I would like to mention is that of gift cards.  Within the last several weeks, we have been given 4 gift cards.  Stanley has had a growth spurt and had outgrown his suit by two sizes (even ripping out the sleeve beyond repair).  By using a gift card for a department store, we were able to buy him a new suit and pay just $40 out of our own pocket.  So, to those of you who have slipped us one of those plastic cards - THANK YOU!

Now, to review some of our recent adventures:

We made the trip from Austin, Texas to California in two days time.  Crossing the desert, there is little to look at.  However, passing these three race car semis several times added to the scenery. 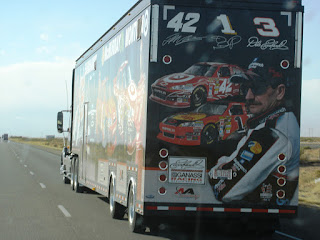 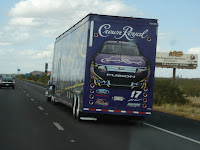 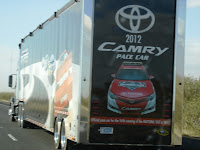 We visited a farm where the children fed the goats, sheep and emus.  We took a walk to a pumpkin patch, had a delicious lunch from the farm deli, and browsed their country store. 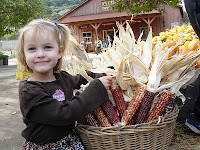 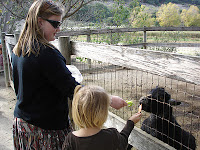 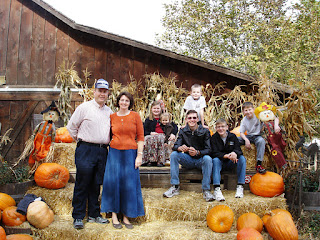 We love walking on the beach barefoot. We had the opportunity to visit the beach twice while in southern California.  The water was so cold (quite a shock to the children who are more used to the warmer Ugandan water), but that didn't deter the wading.

The mall where we bought Stanley's suit had a Walmart -- and it was two levels.  The escalator even carried the grocery carts up and down.

As we were eating supper one night at someone's house, the boy brought out his pets.  Neither Keith nor I are snake-lovers, but we both managed to hold the two snakes.  And, no, my kids will NOT be getting one of these for a pet.  I will stick with chameleons. 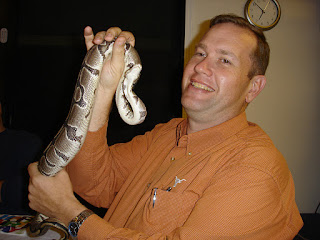 While in San Diego, we were visiting with the family we were staying with and discovered that there was a Creation Museum just 15 minutes from their house. 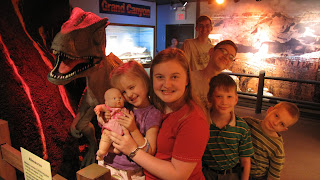 Every time my boys saw the Medievel Castle from the outside, they begged to go.  I wish I could have photographed Shiloh's face when we walked into the parking lot, and he realized we really were going.  It was priceless.  They enjoyed the show immensely.

Getting to experience so many things helps compensate for the long hours of travel, the suitcase "dressers", and the sporadic daily schedule.  I'm just so glad I get to share it all with my best friend.